Ever Have to Choose Between 2 Great Things? 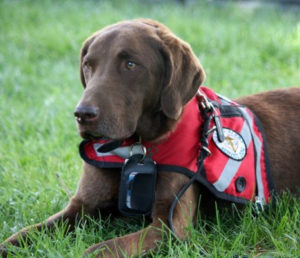 Known around town as the guy who paints animal portraits, means it’s not lost on anyone that I love dogs. When Ray approached me a couple of months back and asked if I would be interested in volunteering at the Freedom Service Dog Annual Golf Fund Raiser I didn’t hesitate for a moment and said “sign me up”. I was thrilled at the thought of being a part of the team to help raise money for such a great cause.

I often work late into the night. It seems that those quiet hours are the best time for me to get into a creative flow. Naturally, most early mornings are spent catching up on sleep, and some mornings I feel like I need cranes and hoists to lift me out of bed before 10:00 am. The fund raiser started at 9:00 – not too bad, but I promised to be at the golf club by 7:00, a 45-minute drive from the house.

What’s the big deal, you might ask? None, as it turned out in comparison to the really fine day and the generosity of the players. Perfect weather, cool and sunny for the full eighteen. The high altitude sun never got oppressively hot, – and it easily can in the month of August. So the attendees were all super spirited, and united for a mutual goal, The Freedom Service Dog Program.

Such a great program. Dogs are brought out of shelters to participate in special training. Dakota, the Program’s ambassador dog, a six-year-old Black Lab was on hand for ear scratching. Dakato had been trained to assist an elderly woman who was unable to bend to pick up objects. They had a beautiful relationship. When his companion passed away, Dakota semi- retired and became the Program’s four-legged front man. He represents just one of hundreds of service dogs that help people with special needs after going through the Freedom Service Dogs‘ program.

The facilitators start with dogs that are all rescues from shelters. On a yearly basis, thirty dogs are evaluated to determine which of them would make a good personal assistance and companion for someone in need. Those that do not qualify are adopted into different families. None of them go back to the shelter. The dogs who make the cut for this kind of work are then trained over a period of a year to be placed with the most appropriate match. 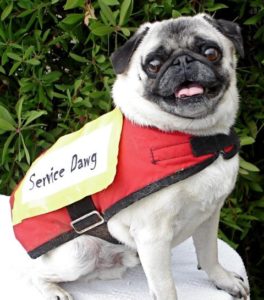 I was personally drawn to the Program when I learned they train dogs for our returning Vets. It hits close to home with my brother-in-law suffering PTSD. After 2 stints in Afghanistan, he came back pretty disoriented. Having a family member who has a service dog to keep him grounded and feeling safe during a flashback is immeasurable. The program means the world to a lot of people.
As the fund raiser date got closer, admittedly, I found myself a little self-absorbed in an art project to the exclusion of anything else around me. True confessions: I had brief moments when I wanted to blow off the fund raiser. The day before, I was on a creative roll and nearly complete with an advertising campaign project I was working on.

Haven’t we all found ourselves in a dilemma of having to choose between two great things? Oh, Life can be so tough! In reality I had already chosen. Volunteering at the Freedom Service Dogs, Golf Tournament was absolutely the right place to be with the right use of my time.

I wanted to be a part of something much bigger than just me or my work. I kept my word and the day was fantastic, the Program, Dogs, and the fortunate recipients of both got a much needed influx of cash and good will. I am grateful for having had the opportunity.